Good Grief Network helps individuals and communities build resilience by creating spaces where people can lean into their painful feelings about the state of the world and reorient their lives toward meaningful action.

What is Good Grief Network?

Good Grief Network is a small grassroots organization that brings people together to metabolize collective grief and other heavy emotions that arise in response to daunting planetary crises.
Using a 10-Step approach inspired by the 12-Step modality Adult Children of Alcoholics (whose parent program is Alcoholics Anonymous), we facilitate peer-to-peer support groups that help people recognize, experience, and process their feelings about the state of the world. As we collectively lean into difficult feelings and build resilience, we strengthen our community bonds and open to new ideas that help us transform heavy emotions into meaningful actions.

The “10-Steps” refers to Good Grief Network’s unique Step program: 10-Steps to Personal Resilience & Empowerment in a Chaotic Climate.
This is a 10-week program, with one step “worked” per week, in small groups. The 10-Step program examines both personal and planetary challenges, through the lenses of acceptance, mortality, privilege, gratitude, biases, boundaries, and more. 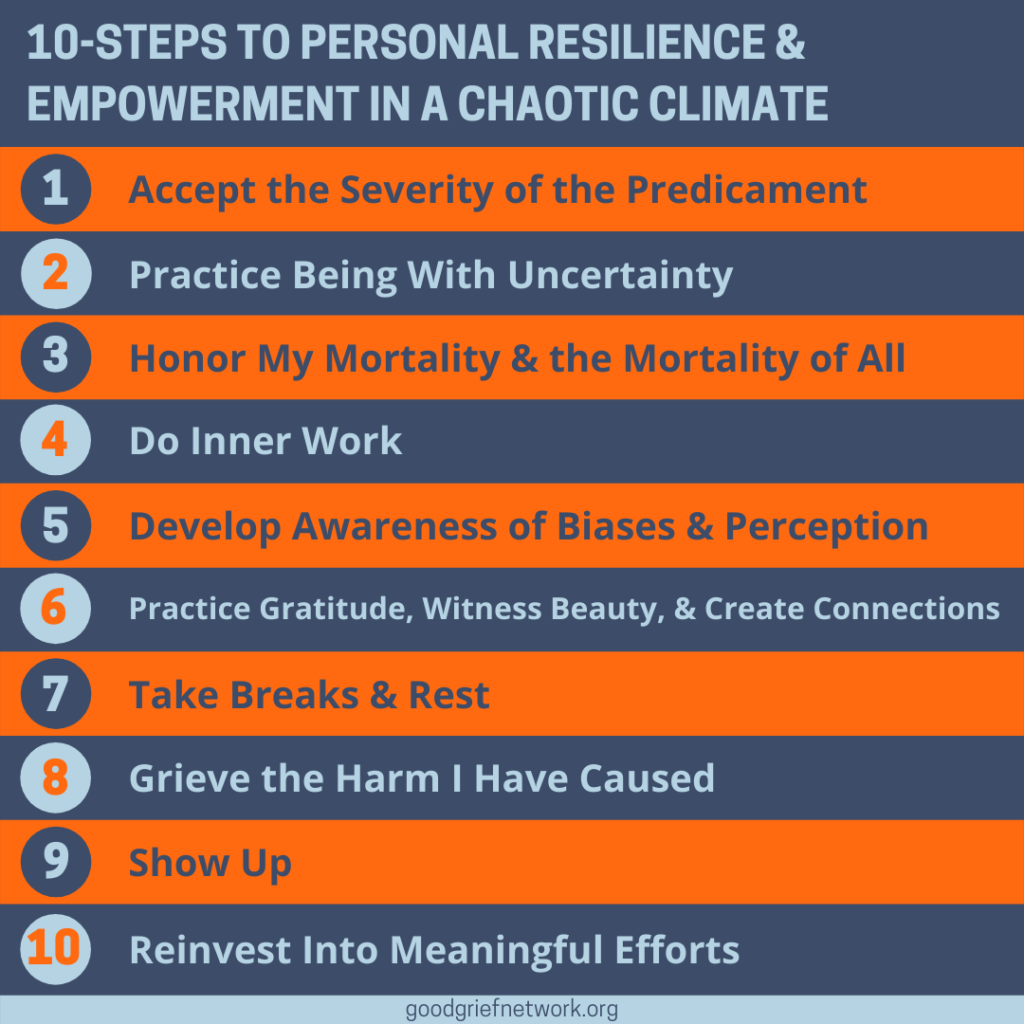 What is eco-grief or eco-anxiety?

Ecological grief is the feeling of emotional and psychological loss suffered as a result of losses in the natural world.
Ecological anxiety is defined by the American Psychological Association as chronic fear of environmental doom.
These terms have become catchall phrases to explain feelings of dread, despair, fear, grief, hopelessness, helplessness, rage, and other heavy or painful feelings that arise as we unpack the severity of the ecological crises. The planetary predicament is comprised of multiple, overlapping problems all stemming from the same root problems: disconnection from self, others, and the more-than-human world. We at Good Grief Network understand the intersectionality of co-occuring problems and bring people together to heal, reconnect, and work towards co-creating life-supporting systems that protect all beings.

Does GGN help people who are grieving a personal loss?

Good Grief Network helps people who feel eco-grief about the state of the world; our support groups do not focus on processsing the acute grief that results from a personal loss.

If you’ve found our page while searching for support in grieving the loss of a loved one, we are so sorry to hear that you are struggling. Each member of our team has experienced devastating loss, and we remember how painful this stage of processing can feel.

If you are seeking support at this time, please consider contacting Grief Recovery Method or Lou Leet, both of whom have knowledge and expertise in the area of processing personal grief. We wish you strength, peace, and support during this profoundly difficult part of your grief journey.

GGN prides itself on embracing a peer-to-peer support modality for all of our 10-Step groups. Within this model, GGN’s facilitators are guides, who experience the despair, grief, and pain of the world right alongside 10-Step participants. They maintain the structure of each meeting but they do not offer advice or guidance to participants.
Because we utilize a peer-to-peer support model, GGN does not require that our facilitators be trained as as therapists. Each GGN facilitator has completed an extensive 30-hour pracitcal Facilitation Training to ensure they are able to cultivate brave spaces that help participants feel comfortable being vulnerable, sharing about their experiences, actively listenng to others, and opening to the emergence of new ideas and perspectives.
If you’re interested in organizations who work at the intersection of psychology and climate justice, we recommend:

When is your next 10-Step program?

Currently, all of our digital 10-Step meetings are full.
Sign up here to be notified of Good Grief Network’s next digital 10-Step meeting, or visit our 10-Step Program page to find an affiliate 10-Step meeting near you.
In the meantime, check out the GGN podcast, WHY?!?, to join GGN’s founders and activists, academics, and eco-spiritualists in conversation about the big existential questions impacting their inner and outer worlds.

Do you run 10-Step programs for kids?

How can I support your work?

Thanks for believing in us! There are many ways that you can support GGN’s work.
As long as we continue to live within a capitalist market economy, one of the most direct ways you can support our work is with a donation.
You can also help us by sharing your skills. As a small, grassroots organization supported by passionate and dedicated volunteers, we are always seeking new hands on deck. Do you have expertise that you believe can help us grow? Contact Sarah JS to speak more about how you can share your unique gifts with GGN!

A NOTE OF THANKS:  We think it can sometimes feel challenging to embrace new terminology, and want to thank you for being open to exploring new ways of communicating. We believe that language can be used as a weapon or a bridge, and as an organization, we strive to use clear and inclusive language that recognizes cultural differences, fosters connection, and creates openings in conversation.

We recognize that the terms we use won’t be clear to people who have never heard them before. For that reason, we’ve put together this Glossary of Terms to help explain what we mean when we use certain terms in our materials. This glossary is an evolving and collaborative work in progress and is not perfect. Please bear with us as we, too, examine the nuances of language and learn to communicate in new ways.

Decolonial: A theoretical framework that is interested in deconstructing/undoing/de-linking Eurocentric ways of understanding the world. (Definition borrowed from Aphro-ism: Essays on Pop Culture, Feminism, and Black Veganism from Two Sisters, with much respect and gratitude to Aph Ko and Syl Ko.)

Decolonize: The practice of deconstructing Eurocentric ways of understanding the world and de-linking those ways of understanding from our behaviors. (Definition borrowed from Aphro-ism: Essays on Pop Culture, Feminism, and Black Veganism from Two Sisters, with much respect and gratitude to Aph Ko and Syl Ko.)

Dominant Paradigm: The monolithic and homogenized culture prevalent in the Western world, characterized by capitalism (more specifically neoliberalism), patriarchy, racism, and other systems of oppression.

Ecological Grief: The feeling of emotional and psychological loss suffered as a result of losses in the natural world.

Emotional Processing: The process by which people identify, discuss, and manage extreme feelings, in order to gradually reduce the amount of emotional reactivity that occurs in response to the thoughts and events that gave rise to such feelings.

Heart-Centered: A state of being in which we prioritize information and make decisions based on compassion, insight and body wisdom, rather than from exclusively rational and egocentric motivations.

Heart-Centered Revolution: A revolution where we open to the innate wisdom that has been buried and covered up by the dominant paradigm. As we open to our interconnectedness to all beings and the natural world, we make decisions based on compassion and insight rather than from egocentric motivations. Instead of thoughtless and selfish actions, we reinvest ourselves with an understanding of the consequences to the larger world. The heart-centered revolution is brought about by our inner equanimity and from our Love for each other, the natural world, and ourselves.

Predicament: The interlinked set of problems that have amassed such complexity they can no longer be solved. Moving forward, we establish relationships with a predicament instead of solving it.

Solastalgia: The feeling of being homesick when one is still at home because the environment has changed so much that it is no longer recognizable and the solace once found there is lost.